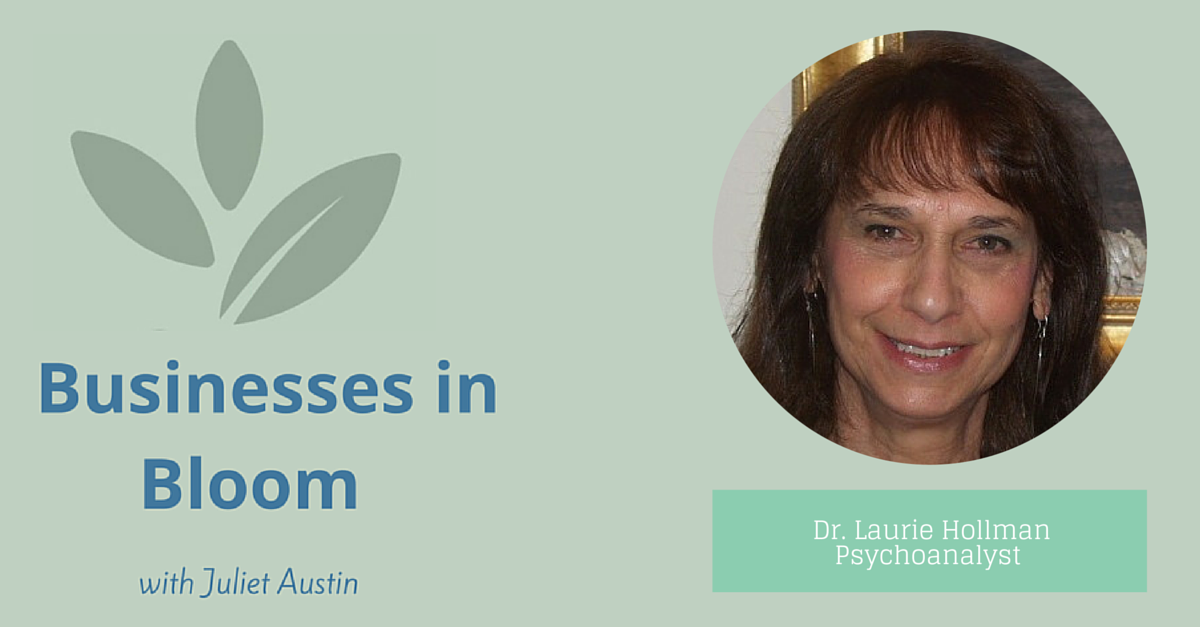 Dr. Laurie Hollman is a Psychoanalyst and Author in New York.

In the interview, she talked about the importance of being a mother and a Psychoanalyst for over 30 years. Balancing both of these roles are the reasons she focuses on working with people across the lifespan – from infants to adults.

After 30 years, Dr. Hollman is well known in her area and therefore has a consistent stream of referrals from doctors, pediatricians, and other colleagues. We discussed how she reached out to these referral sources initially by sending them papers describing the various problems and advising them how to make a referral to her. She attributes her success to being an optimist and a hard worker.

[1:30]    Laurie shares how her work as a therapist was shaped in part by her role as a mother.

[7:37]    Laurie explains how she got started building her therapy practice.

[12:12]  Laurie reports that her clients are primarily private pay. She explains why she doesn’t like accepting insurance.

[16:15]   Laurie states that others have told her that people are competitive and not willing to help when building a practice. She explains that instead of being competitive, she has found people to be very generous.

[17:35] Laurie mentions that her practice has been full for a long time, so she is very busy. She also writes a lot.

[18:02]  Laurie discussed her book, which she describes as the culmination of her 30 years of being a therapist and mother. She described her book as her mission.

[26:23] She describes some issues she has with attachment theory.

[38:00] Laurie states that you can become an expert at something if you work hard and are passionate about what you are doing. She added that it is also important to take risks.

Dr. Laurie Hollman, Ph.D. is a psychoanalyst with specialized clinical training in infant-parent, child, adolescent, and adult psychotherapy. She has been on the faculties of New York University and the Society for Psychoanalytic Study and Research, among others.

She has written extensively on parenting for various publications, including the Psychoanalytic Study of the Child, The International Journal of Infant Observation, The Inner World of the Mother, Newsday’s Parents & Children Magazine, Long Island Parent. She writes her popular column, PARENTAL INTELLIGENCE, at Moms Magazine and blogs forHuffington Post. Her new book is called, “Unlocking Parental Intelligence: Finding Meaning in Your Child’s Behavior.”

“I would highly recommend Juliet as a copywriter and a marketing coach to anyone who is starting up in business. Her copywriting skills alone are worth their weight in gold. I wasted more than £600 on two previous websites until Juliet helped me write the copy on my current site. It’s proving to be very successful in attracting clients. I can’t thank Juliet enough for all the help and encouragement she gave me. You may think she is costing you money, but I promise you her help and advice… END_OF_DOCUMENT_TOKEN_TO_BE_REPLACED

“My practice filled very quickly after Juliet wrote the copy on my website. I recouped my investment – and more– within a few months of having my website up. I know the reason for this is the tight, targeted copy on my site. How do I know this? Because when people write me to let me know they want to work with me, their emails are very personal. They tell me how much my website copy resonated with them and are ready to commit to working with me before we have even spoken! My practice is now… END_OF_DOCUMENT_TOKEN_TO_BE_REPLACED

“When I was first referred to you for help with marketing I was lost and I didn’t know what to do to build my massage therapy practice. I was afraid to take any steps in fear of taking the wrong ones. You helped me create a great message on my website focusing on my ideal clients and then you helped me market my practice effectively. With your expert knowledge and skills, I became excited and motivated about my massage practice again. Most importantly, I have 3 times as many clients! Thanks … END_OF_DOCUMENT_TOKEN_TO_BE_REPLACED