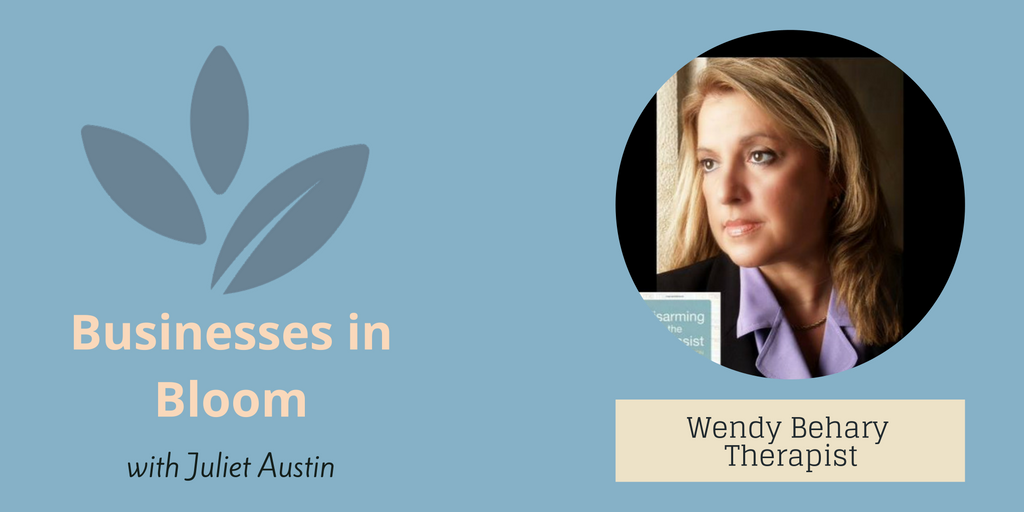 Wendy Behary is a psychotherapist based in New Jersey. She works primarily with narcissists, using Schema Therapy. In this interview, Wendy discusses how she became involved with Schema Therapy and how she built a successful private practice. She talks about her books and international teaching engagements.

[3:08]  Wendy discusses how she got started in psychotherapy. Her background is in sociology, and through social work, she came to psychotherapy, which she’s done for over 20 years. She also leads therapy trainings, works with clients, supervisors other therapists, and writes.

[4:52]  Wendy’s interest in human behavior and the psyche encouraged her to pursue a degree in psychotherapy. It became the obvious choice for her career as she wanted to work with people.

[6:26]  Wendy does a lot of speaking – both in person workshops and some webinar based. She speaks on the topic of narcissism to general audiences. She speaks about narcissism, couples or anger, and schema therapy to therapists.

[7:48]  Working with narcissists is a challenge—Wendy acknowledges that they can push your buttons. Wendy says early on she had a hard time working with that population, which she compares to her childhood in the 1960s, being around Catholic nuns. She wanted to challenge herself and so chose narcissists as her niche.

[9:29]  Wendy’s client base is mostly narcissistic men (and some women), and the “offended parties,” the people around them. She sees many couples. She works with people who have other personality disorders as well. Usually, narcissists are sent to her from their partners or their employers. They typically don’t choose to come to therapy.

[12:55]  Wendy finds that Schema Therapy is more hopeful than some others.models of therapy. It is an evidence based model.

[13:40]  Wendy says she’s one of the few therapists who chooses to work with this population. Not many people believe narcissists can change. They’re frustrating to work with and they don’t respond well to treatment. She gets requests for referrals every day, from around the country, and doesn’t know enough therapists to refer clients to.

[15:00]  Wendy has trained colleagues to whom she can refer clients. There is a demand for therapists to work with this population.

[15:36]  Wendy explains why she keeps going with this population; she’s learned to see beneath the veneer (charmer, bully, entertainer). She can see the vulnerability below the surface. In understanding the narcissist’s makeup she knows there’s a suffering part at the base. If she can get there, she can help them. They’re lonely people, with lots of insecurity. It’s rewarding to see them become more empathic and caring.

[18:00]  Wendy says there are a lot of myths about narcissists, which she’s happy to debunk. It’s true they’re not good at empathy, but it’s an underdeveloped capacity, not an absent one. They’re not all abusive; they’re sometimes just showoffs, martyrs, or bullies. There’s not just one type of narcissist. The other myth is that they can’t change. If the therapist has leverage, is sturdy in their own skin, and have a model to work with, there is a good shot at changing their behaviors.

[20:54]  Wendy has done 14 media interviews in the past month, and gets one or two requests a day for more.

[22:40]  Wendy discusses Schema Therapy. She founded a cognitive behavioral therapy center, and then met Dr. Jeffrey Young at Columbia in the late 80s—he was developing ideas around early Schema Therapy.

She worked with Dr. Young and other therapists in NYC to set up longer-term personality disorder therapeutic programs,  at the same time that HMOs started limiting therapy treatments. They worked with colleagues in Europe, particularly Holland, to teach the theory and methodology. Currently, 45 countries have Schema Therapy programs, all bound under the International Society of Schema Therapy (ISST).

[26:50]  Schema Therapy looks at early life experiences and the unmet needs within people. These unmet needs form early maladaptive schemas (traits). The schemas become ways people interact with the world, throughout their life. Schema Therapy looks deeper than automatic thoughts and CBT; it looks at maladaptive ways we cope and goes to the most vulnerable parts of self. It tries to meet the needs in people that were never met.

[28:50]  There aren’t many studies around narcissism, and the samples are small. It’s hard to hold narcissists in therapy. But Wendy says the evidence available shows Schema Therapy works well for them.

[29:58]  Wendy has written one book and is under contract to write another. Her first is, “Disarming the Narcissist.” The second, “Let’s Face It,” looks at a variety of confrontations, through vignettes. It’s for the general reader, but appeals to clinicians.

[31:38]  Wendy’s schedule changes a lot. Some weeks she sees 4 patients, other weeks, 20. It depends on her speaking and training calendar. She teaches and gives presentations on the road. Wendy also does Skype and phone consultations. Lawyers consult with her about difficult personalities in courtrooms.

[34:16]  Wendy likes to train therapists because she likes to see them develop confidence in Schema Therapy.

[37:32]  Wendy started specializing in narcissists in the early 1990s. She was aware it was a good business move (she lives just outside of NYC), besides being interested in the work.

[38:50]  Wendy’s cutting back a bit on her workload. She’s traveling less and concentrating more on less travel.the US. She’s doing creative development for the ISST.

[40:00]  Wendy’s advice to new therapists: network like crazy, meet the people you admire and learn from them. Eventually, you’ll see where you click with what types of clients you enjoy working with. You don’t have to be good at everything.

With 25 years post-graduate training and advanced level certifications, Wendy Behary is the founder and director of The Cognitive Therapy Center of New Jersey and The New Jersey Institute for Schema Therapy. She has been treating clients, training professionals and supervising psychotherapists for more than 20 years. Wendy was on the faculty of the Cognitive Therapy Center and Schema Therapy Institute of New York (until merging in 2012 with the NJ Institute), where she trained and worked with Dr. Jeffrey Young since 1989.

Wendy is a founding fellow and consulting supervisor for The Academy of Cognitive Therapy (Aaron T. Beck Institute). Wendy served as the President of the Executive Board of the International Society of Schema Therapy (ISST) from

Wendy was on the faculty of the Cognitive Therapy Center and Schema Therapy Institute of New York (until merging in 2012 with the NJ Institute), where she trained and worked with Dr. Jeffrey Young since 1989. She is a founding fellow and consulting supervisor for The Academy of Cognitive Therapy (Aaron T. Beck Institute). Wendy served as the President of the Executive Board of the International Society of Schema Therapy (ISST) from 2010-2014, and is currently the chair of the Brainstorming Sub-Committee for the ISST.

Wendy  has co-authored several chapters and articles on Schema Therapy and Cognitive Therapy. She is the author of “Disarming the Narcissist,” which has been translated into 10 languages. As an author and an expert on the subject of narcissism, she is a contributing chapter author of several chapters on schema therapy for narcissism for professional readers.

She lectures both nationally and internationally to professional and general audiences on schema therapy, and the subject of narcissism, interpersonal relationships, anger, and dealing with difficult people. Her work with industry has included speaking engagements focused on interpersonal conflict resolution. Her private practice is primarily devoted to treating narcissists, partners/people dealing with them, parenting issues, and couples experiencing relationship problems.

“When I was first referred to you for help with marketing I was lost and I didn’t know what to do to build my massage therapy practice. I was afraid to take any steps in fear of taking the wrong ones. You helped me create a great message on my website focusing on my ideal clients and then you helped me market my practice effectively. With your expert knowledge and skills, I became excited and motivated about my massage practice again. Most importantly, I have 3 times as many clients! Thanks … END_OF_DOCUMENT_TOKEN_TO_BE_REPLACED

“I would highly recommend Juliet as a copywriter and a marketing coach to anyone who is starting up in business. Her copywriting skills alone are worth their weight in gold. I wasted more than £600 on two previous websites until Juliet helped me write the copy on my current site. It’s proving to be very successful in attracting clients. I can’t thank Juliet enough for all the help and encouragement she gave me. You may think she is costing you money, but I promise you her help and advice… END_OF_DOCUMENT_TOKEN_TO_BE_REPLACED

“My practice filled very quickly after Juliet wrote the copy on my website. I recouped my investment – and more– within a few months of having my website up. I know the reason for this is the tight, targeted copy on my site. How do I know this? Because when people write me to let me know they want to work with me, their emails are very personal. They tell me how much my website copy resonated with them and are ready to commit to working with me before we have even spoken! My practice is now… END_OF_DOCUMENT_TOKEN_TO_BE_REPLACED