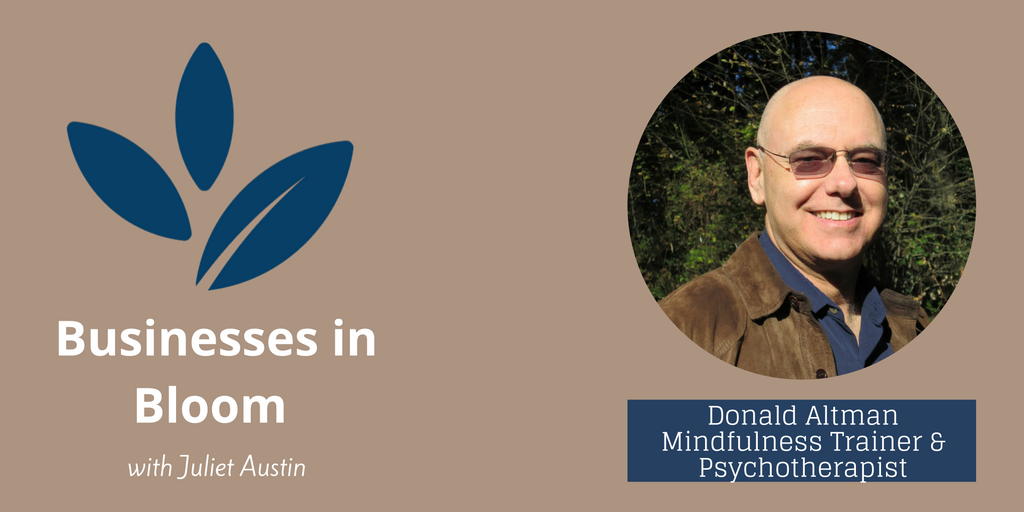 Donald Altman is an international mindfulness trainer and speaker as well as a best-selling author. He’s also been a comic book writer, a psychotherapist, and a Buddhist monk. In this interview, Donald talks about writing, leading mindfulness workshops, and building a private practice. He offers tips on writing, publishing, and balancing a workload.

[2:10]  Donald talks about his early career as a professional writer. He wrote an interactive Internet comic strip called “Zombie Detective”.  Donald eventually became ordained by a Burmese Buddhist monk and spent time in a monastery. After he left the monastery (and gave up his monk’s robes), he started writing about the spiritual side of eating. He held workshops on this topic and decided to go to graduate school for a master’s degree in counseling psychology.

[5:09]  Donald worked at an eating disorder clinic and a psychiatric clinic in Portland for several years after he got his counseling license. Eventually, he opened his own therapy clinic but kept writing.

[6:12]  Donald talks about starting his own counseling practice. He set it up while working at the outpatient clinics. He branched out from eating disorders into more generalized disorders. He says he hit the “mindfulness wave” in psychotherapy at the right time.

[8:10]  Donald talks about offering more mindfulness training workshops, along with his books.

[8:30]  Donald contacted local papers to publicize his private practice early on, and they wrote stories about him. He got on local television and radio shows to promote his books. He wrote a newsletter for anyone who came into his office and led a weekly meditation group. Both of these led to referrals.

[10:30]  It took Donald a year and a half to build a solid practice. Getting placed on an HMO referral list helped. Eventually, he was able to leave his on-call job at the eating disorders clinic and work full time in his counseling practice.

[13:04]  Donald talks about his books. He started writing his first mindfulness book while in the monastery. He wrote his next two books while in graduate school. He says he’s been fortunate to find good publishers, like New World Library, who worked around his schedule.

[15:55]  Donald had 3 books come out last year. He says he’s reached the point where he knows how to structure books and avoid common writing roadblocks.

[20:52]  Donald doesn’t see therapy clients anymore. He was traveling to hold workshops and writing too much to serve his clients’ needs, so he gave up his practice. He trains people across the country in mindfulness. Donald led a mindfulness training in Italy last year.

[22:20]  Donald has held 90 workshops in one year—he’s cut back in the interests of self-care. Now he travels once or twice a month to hold workshops, and sometimes leads up to five in a month.

[23:44]  Donald puts out a monthly newsletter on his website to build his customer base and he’s on LinkedIn. Word of mouth from workshop participants also helps build his business.

[25:00]  Currently, Donald holds workshops just for therapists but he’s developing some for the general public.

[26:38]  Donald talks about online classes. He’s not doing any right now, but he has in the past. He likes face-to-face learning because it’s more interactive, but he is planning to do more Internet training.

[31:00]  Donald talks about his writing style. He doesn’t write every day, but he does write most days. Some days he writes 8 to 12 hours, riding on creative energy.

[32:31]  Donald talks about common roadblocks facing new writers. Much of book marketing has been transferred from publishers to authors. Publishers want to see how you can reach your audience before committing to your book.

[33:45]  Developing new workshops is the most challenging part of Donald’s work. He brings in a lot of elements to keep people engaged. When he first started holding workshops he co-taught with a seasoned teacher who served as a mentor. Donald says the experience of the workshop is as important as how much material is presented.

[37:51]  Donald shares his wisdom about starting out as a therapist. He says when you are looking for an area to specialize in, really tap into your values. Ask yourself, “how do I want to impact people?” Find something that’s important to your heart and follow that.

“My practice filled very quickly after Juliet wrote the copy on my website. I recouped my investment – and more– within a few months of having my website up. I know the reason for this is the tight, targeted copy on my site. How do I know this? Because when people write me to let me know they want to work with me, their emails are very personal. They tell me how much my website copy resonated with them and are ready to commit to working with me before we have even spoken! My practice is now… END_OF_DOCUMENT_TOKEN_TO_BE_REPLACED

“When I was first referred to you for help with marketing I was lost and I didn’t know what to do to build my massage therapy practice. I was afraid to take any steps in fear of taking the wrong ones. You helped me create a great message on my website focusing on my ideal clients and then you helped me market my practice effectively. With your expert knowledge and skills, I became excited and motivated about my massage practice again. Most importantly, I have 3 times as many clients! Thanks … END_OF_DOCUMENT_TOKEN_TO_BE_REPLACED

“I would highly recommend Juliet as a copywriter and a marketing coach to anyone who is starting up in business. Her copywriting skills alone are worth their weight in gold. I wasted more than £600 on two previous websites until Juliet helped me write the copy on my current site. It’s proving to be very successful in attracting clients. I can’t thank Juliet enough for all the help and encouragement she gave me. You may think she is costing you money, but I promise you her help and advice… END_OF_DOCUMENT_TOKEN_TO_BE_REPLACED