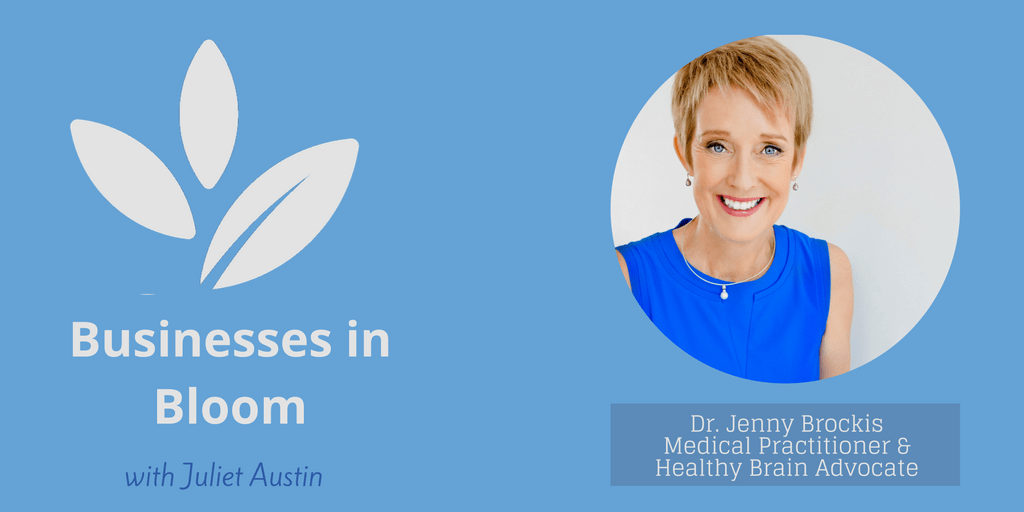 Dr. Jenny Brockis is a healthy brain advocate based out of Perth, Australia. After careers as both a nurse and a general medical practitioner, she began her own business mentoring, public speaking, hosting workshops, and writing. In this interview, Jenny discusses why she left her medical practice to start a new business, why she’s fascinated by the human mind and its interactions, and how she has built her new business.

[2:02]  Jenny talks about her past as a general medical practitioner and medic in Australia.

[2:51]  Jenny was born and raised in the UK. She began her career as a nurse but was influenced to go into medicine by her roommates who were medical students.

When Jenny moved to Australia, she set up her medical practice.  She was seeing a lot of retired people with dementia and people with stress-related disorders from their jobs. Eventually, she decided that she wanted to help people before they became ill. She became interested in cognitive health.

[8:55]  Jenny is coming into the 5th year of her business. She’s had to learn many new skills, like running workshops and speaking in public. This has pushed her out of her comfort zone.

[10:15]  Jenny discusses how she has had to learn how to implement systems to streamline her business.

[11:50]  At first Jenny thought she’d be able to keep working in her medical practice while running her new business, but it was too much. She chose to left her general practice behind, which was hard—she had built up that practice from the ground. She gave up a good income for a period of no income.

[14:09]  Jenny explains that she works with small to medium companies, educational institutions, and occasionally larger corporations. She prefers the smaller venues because she finds their staff can implement change easier.

[17:05]  Jenny talks about her program for changing behaviors. First, she checks in with a person’s physiological needs (eating, sleeping, managing stress), then she addresses the thinking or behavioral patterns that are in the way.

[19:43]  Jenny shares how she  helps people develop lifestyle strategies towards better mental health. She believes that no two brains share the same neural architecture, so there’s no “one size fits” all technique.

[21:06]  Jenny has written 3 books.  The first book was lifestyle oriented, and comprised of many blog posts she had written. The second, Brain Smart, was more targeted at a general audience. It’s a productivity-based book about managing distractions. Her latest book, Future Brain, is about creating a healthy brain and relating better with other people. It was published in 2015 and has done well.

[24:37]  Jenny speaks about her current schedule. She does some one-to-one mentoring, but only with 8 or 10 people at a time. Her traveling, speaking, and workshops require a lot of time, and she has to care for her own mental health.

[26:03]  Jenny says most of her clients are from Australia and New Zealand. Recently she has acquired more followers in the UK and Canada. People have found her through her latest book and through social media platforms.

[27:53]  Jenny talks about how she initially advertised her business: cold calling and how she hated doing that. Later, she started reaching out more on social media asking people what they needed. She says she’ll never cold call anyone again. Jenny likes to build connections with real value.

[30:30]  Jenny talks about traveling to Hong Kong to work on a joint project with a colleague she met several years ago through social media.

[31:50]  Jenny writes a regular email newsletter. It used to be weekly, now it’s every other week because she doesn’t want to flood people’s inboxes.  She still writes a weekly blog.

[33:11]  Continuity, maintaining focus, and changing momentum are big challenges for Jenny. She works with a business mentor and has had a series of them since she left her medical practice. Brain science is a huge field with new information all the time, so it’s challenging to keep up.

[36:45]  Jenny says that now that she is 5 years into her business she knows where to place her attention.

[38:24]  Jenny is looking towards her next few books. She has a big picture plan for a particular book and is in talks with a publisher.  She wants to limit her travel time, as it is tiring.

[41:17]  Jenny offers advice for new business owners: Ask for help. You can put in an enormous amount of time and effort into something that won’t work so getting advice is important. Hearing options and variables from other successful people can help. Be prepared to put in the hard work. To be successful in business you have to be visible.

Dr. Jenny Brockis is a medical practitioner, healthy brain advocate, and future mind planner. She works as the Director and founder of Brain Fit.

Jenny believes the greatest gift we can ever receive is greater brain awareness, what it takes to create a fit and healthy brain optimized to work at its best. She works with business leaders, managers, and educators who seek to enable everyone to bring their best selves to work with the mental flexibility, agility, and innovation to thrive in our modern world.

As a conference speaker, trainer, author and medical commentator. Dr. Jenny seeks to make brain fitness as well understood as Jamie Oliver has made healthy nutrition. You can find out more about Jenny at http://www.drjennybrockis.com/.

“My practice filled very quickly after Juliet wrote the copy on my website. I recouped my investment – and more– within a few months of having my website up. I know the reason for this is the tight, targeted copy on my site. How do I know this? Because when people write me to let me know they want to work with me, their emails are very personal. They tell me how much my website copy resonated with them and are ready to commit to working with me before we have even spoken! My practice is now… END_OF_DOCUMENT_TOKEN_TO_BE_REPLACED

“When I was first referred to you for help with marketing I was lost and I didn’t know what to do to build my massage therapy practice. I was afraid to take any steps in fear of taking the wrong ones. You helped me create a great message on my website focusing on my ideal clients and then you helped me market my practice effectively. With your expert knowledge and skills, I became excited and motivated about my massage practice again. Most importantly, I have 3 times as many clients! Thanks … END_OF_DOCUMENT_TOKEN_TO_BE_REPLACED

“I would highly recommend Juliet as a copywriter and a marketing coach to anyone who is starting up in business. Her copywriting skills alone are worth their weight in gold. I wasted more than £600 on two previous websites until Juliet helped me write the copy on my current site. It’s proving to be very successful in attracting clients. I can’t thank Juliet enough for all the help and encouragement she gave me. You may think she is costing you money, but I promise you her help and advice… END_OF_DOCUMENT_TOKEN_TO_BE_REPLACED