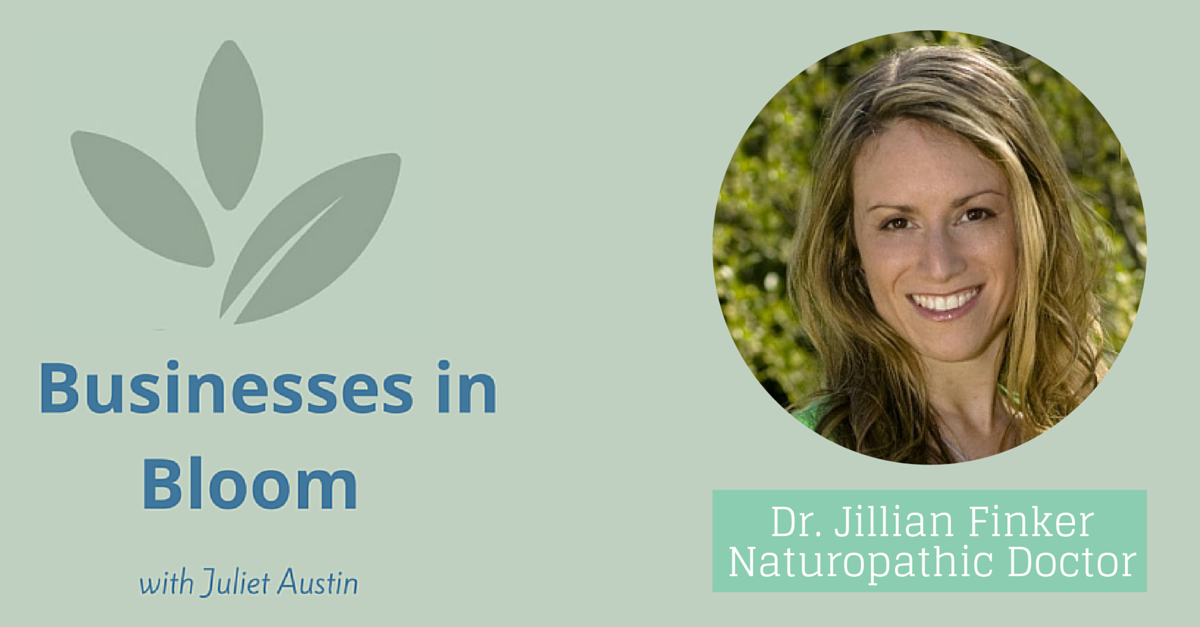 Naturopathic Doctor, Jillian Finker, wanted to become a medical professional since she was a child due to some medical issues she had that were resolved via natural medicine. She built her naturopathic practice within a few years via referral marketing, speaking and through the naturopathic association website. Jillian has a full practice with a waiting list. She currently does minimal marketing.

[02:05] Jillian says that her revenue as a naturopathic doctor comes solely from her sessions from patients as they pay for private treatments.

[02:23] Jillian talks about having an interest in natural medicine since she was very young. Her interest was inspired by her experiences with asthma. She recalls the advice she received from her mother and a chiropractor, both of whom suggested that she would suit a career as a naturopath.

[05:53] Jillian explains how she was asked to lecture on naturopathic medicine when she started out and how this helped her to build her practice initially. She adds that she doesn’t have much time to lecture anymore.

[07:55] Jillian says that she still gets a few patients from advertising in a local paper, from her website and from being a member of the National Association of Naturopaths. She stresses that the majority of her referrals now come from word of mouth.

[10:10] Jillian believes that although she may have initially had doubts when she set up her business, she persisted because she really wanted to help people.

[11:29] Jillian expresses gratitude for her assistant who manages the front desk and helps her run her business.

[14:10] Jillian believes that the success of her practice comes not only from her passion for working in natural medicine but also from having been a member of the local community since she was a child. She understands her community and the issues of the locals.

[16:04] Jillian explains the different treatments that she uses in her practice including nutrition advice, botanical products, and working on lifestyle changes with her patients. She stated that many of the problems that people would see their primary doctor for may respond well to treatment with natural medicine.

[18:16] Jillian discusses the lack of alternative practitioners in Long Island and stated that this may be part of the reason that her naturopathic practice is overbooked.

[19:30] Jillian reported that she hasn’t found the right associate yet but has considered hiring one since her practice is very busy and she has a waiting list.

[19:56] Jillian advises other practitioners starting a business to pick a location to settle in to. She believes that this should also be one that their business can expand in.

[20:42] Jillian also feels that it is important to have a good referral network, and she suggests meeting with other healthcare professionals in the community to create this.

Dr. Jillian Finker, Naturopathic Doctor has a private practice in Bellmore, New York called Finker Wellness. She specializes in women’s health and is an expert in natural medicine. Dr. Finker has been selected as the best Alternative Doctor on Long Island for 2011, 2012 and 2013.

She has been on various television programs, radio shows and she is a frequent lecturer nationwide. She was the technical editor for Boosting Your Immunity for Dummies, Adrenal Fatigue for Dummies, and is in the process of editing other health books.

Her work has been highlighted in First for Women’s magazine several times, along with other major journals and publications. It’s About Wellness, Naturally her latest publication is available on www.drfinker.com

To be notified when new episodes of the show are published click here.

“When I was first referred to you for help with marketing I was lost and I didn’t know what to do to build my massage therapy practice. I was afraid to take any steps in fear of taking the wrong ones. You helped me create a great message on my website focusing on my ideal clients and then you helped me market my practice effectively. With your expert knowledge and skills, I became excited and motivated about my massage practice again. Most importantly, I have 3 times as many clients! Thanks … END_OF_DOCUMENT_TOKEN_TO_BE_REPLACED

“I would highly recommend Juliet as a copywriter and a marketing coach to anyone who is starting up in business. Her copywriting skills alone are worth their weight in gold. I wasted more than £600 on two previous websites until Juliet helped me write the copy on my current site. It’s proving to be very successful in attracting clients. I can’t thank Juliet enough for all the help and encouragement she gave me. You may think she is costing you money, but I promise you her help and advice… END_OF_DOCUMENT_TOKEN_TO_BE_REPLACED

“My practice filled very quickly after Juliet wrote the copy on my website. I recouped my investment – and more– within a few months of having my website up. I know the reason for this is the tight, targeted copy on my site. How do I know this? Because when people write me to let me know they want to work with me, their emails are very personal. They tell me how much my website copy resonated with them and are ready to commit to working with me before we have even spoken! My practice is now… END_OF_DOCUMENT_TOKEN_TO_BE_REPLACED