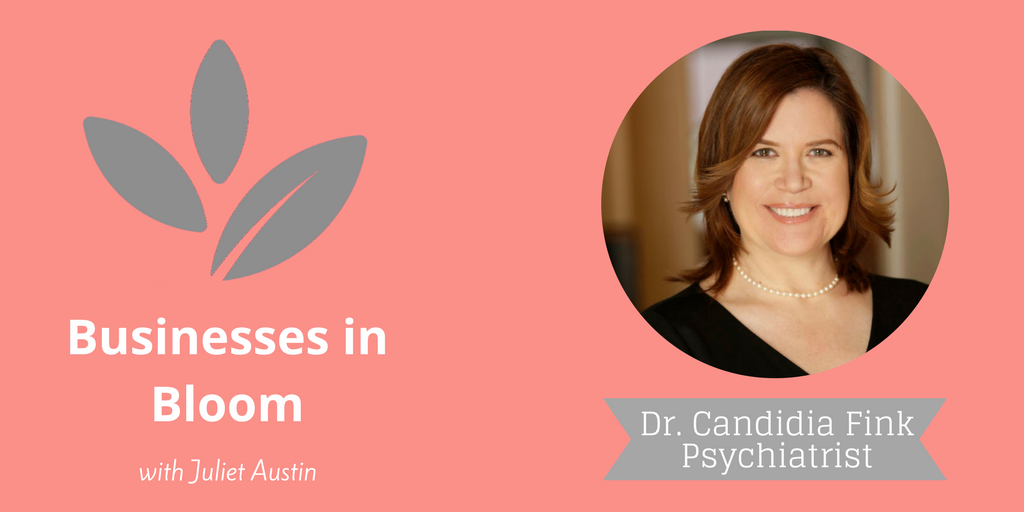 Dr. Candida Fink is a psychiatrist and author living in New Rochelle, NY. She’s built a busy private practice (primarily around child psychiatry and bipolar disorder), has written two books, and blogs at Psych Central. In this interview Candida talks why she became a psychiatrist, her advocacy work for children and families, and some recent changes in her field.

[3:02] Candida talks about her early interest in psychiatry. She knew since high school that she wanted to be a psychiatrist, and worked towards this goal through college and grad school. She did a fellowship in child psychiatry in Boston and then went out west to work in the field. Eventually Candida came back to New York and built a private practice.

[5:00] Candida speaks about her childhood and how it influenced her decision to become a psychiatrist. There were mental health issues in her immediate family, and her brothers had learning problems. Candida’s mother was a strong advocate for their education at a time when there weren’t many resources available.

[7:00] Candida talks about her private practice. She sees some adults but mostly children and adolescents. She sees clients with bipolar disorder, OCD, autism, depression, learning challenges, and other mental illnesses.

[12:20] Candida explains how children with anxiety disorders can have big explosions. If these children were labeled bipolar, they would not be treated with the right therapies and medications. Diagnosing isn’t an exact science and when kids are misdiagnosed, they suffer.

[14:30] At this point, psychiatry is more integrated with the medical care of bipolar children, Candida says. This makes it an exciting time to be in the pediatric psychiatry field.

[15:05] Candida prescribes medication and does individual therapy, parent work, and school consultations. The first step with children is a psychiatric evaluation. She says she uses medication as a last resort on developing brains.

[18:13]  Candida talks about her two books. Neither is scholarly, they are both intended for lay audiences. “ Bipolar for Dummies” is part of the “ for dummies” series. She supported the series hands-on approach because it’s designed to get more information out to people. The humor in it appealed to her.

[22:55] Candida explains how she came to practice both psychotherapy and psychiatry. She worked in Phoenix for several years where mental health professionals were ahead of the curve with integrative therapy. She says her training as a physician has taught her to look at the whole person before diagnosing. She learned therapy and intervention techniques in university and in the field.

[27:22] Candida says she never wanted to be strictly a psychiatrist who prescribes medication, the kind where you walk into the office, talk for five minutes, and leave with a prescription.

[27:40] Candida has a cash-only practice. Child psychiatry is an under-filled field, she says, and the insurance reimbursement model is not very good. She was expected to see far more clients in an hour than she could evaluate and work with, so she switched to a cash-only model. She started out taking overflow patients from other psychiatrists. Gradually Candida built up a referral network through parents, pediatricians, therapists, and schools.

[30:50] Candida says she built a website fairly early on and it has helped her practice grow. She gets most of her patients through referrals. She gets traffic to her site through her blogs.

[34:30] Candida offers her advice to new therapists: Don’t be afraid to toot your own horn or to try something different. Stay connected with your peers through social media and part-time jobs.

Dr. Fink is a graduate of the Boston University School of Medicine. She did her psychiatry residency at Beth Israel Hospital, Boston and her child fellowship at Boston Children’s Hospital, both teaching centers for Harvard Medical School.

Dr. Fink is a diplomate of the American Board of Psychiatry and Neurology, with certifications in general and child/adolescent psychiatry.  Dr. Fink has practiced privately in Massachusetts, Arizona, and Nevada, and currently lives and practices in New Rochelle, New York. Dr. Fink’s work has extended from child to adult populations, including: psychopharmacology; individual and family therapy and coaching; teaching and supervision of medical students, residents, and fellows; inpatient and outpatient care; consultation to schools and preschools; treating children with developmental disabilities, fetal alcohol exposure, and behavioral disabilities; early childhood psychiatric diagnoses and more.

Dr. Fink has co-authored two books –The Ups and Downs of Raising a Bipolar Child (with Judith Lederman, Simon and Schuster, 2003) and Bipolar Disorder for Dummies (with Joe Kraynak, John Wiley & Sons, 2005, second edition 2012, third edition 2015). She has been featured nationally and locally in broadcast, print, and online media coverage and is a frequent speaker on mental health topics for community and school-based audiences.

She was recognized as a Top Doctor in WestchesterMagazine 2013, 2014, 2015 and 2016. The Ups and Downs of Raising a Bipolar Childwas recognized by the New York chapter of the National Association of Mental Illness as contributing significantly to greater understanding of mental illness in the community.

Dr. Fink blogs about mental health, child development, and girls/women’s issues at her website www.finkshrink.com, and about bipolar and related conditions at Psych Central’s Bipolar Beat.

“My practice filled very quickly after Juliet wrote the copy on my website. I recouped my investment – and more– within a few months of having my website up. I know the reason for this is the tight, targeted copy on my site. How do I know this? Because when people write me to let me know they want to work with me, their emails are very personal. They tell me how much my website copy resonated with them and are ready to commit to working with me before we have even spoken! My practice is now… END_OF_DOCUMENT_TOKEN_TO_BE_REPLACED

“I would highly recommend Juliet as a copywriter and a marketing coach to anyone who is starting up in business. Her copywriting skills alone are worth their weight in gold. I wasted more than £600 on two previous websites until Juliet helped me write the copy on my current site. It’s proving to be very successful in attracting clients. I can’t thank Juliet enough for all the help and encouragement she gave me. You may think she is costing you money, but I promise you her help and advice… END_OF_DOCUMENT_TOKEN_TO_BE_REPLACED

“When I was first referred to you for help with marketing I was lost and I didn’t know what to do to build my massage therapy practice. I was afraid to take any steps in fear of taking the wrong ones. You helped me create a great message on my website focusing on my ideal clients and then you helped me market my practice effectively. With your expert knowledge and skills, I became excited and motivated about my massage practice again. Most importantly, I have 3 times as many clients! Thanks … END_OF_DOCUMENT_TOKEN_TO_BE_REPLACED