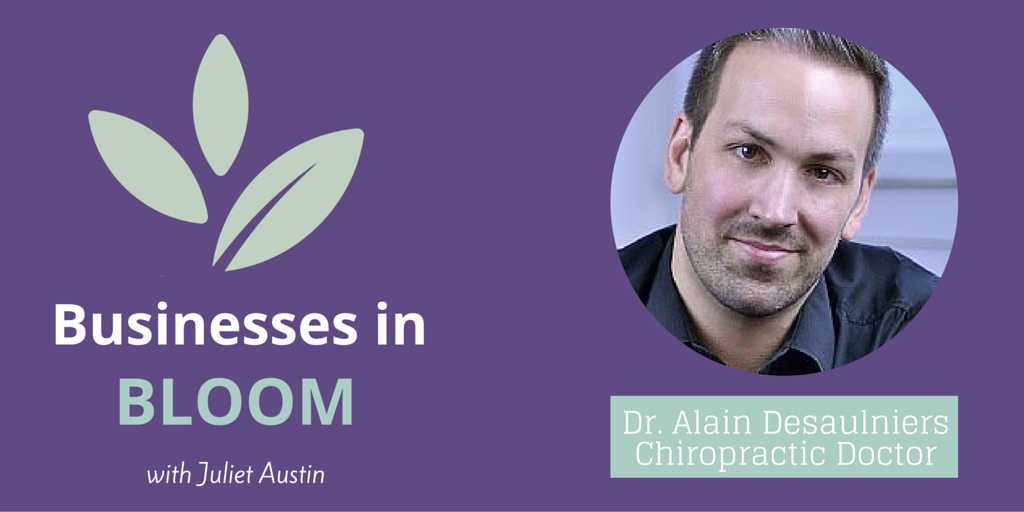 Dr. Alain Desaulniers is a chiropractic doctor in Vancouver, BC. He comes from a family of more than 43 chiropractors spread over 2 generations! Chiropractic work has become a lifestyle for his family. Alain didn’t originally decide to be a chiropractor, but he does remember being told by his parents as he was growing up to make sure that whatever he did, it served a bigger idea than just himself.

Dr. Desaulniers candidly discusses the mistakes he made when he first began his private practice and how it led to him doubting his self-worth. Fortunately, he stuck with it and now runs a busy office with an associate. Listen to the podcast and check out his bio below.

[2:54] Alain talks about his family of more than 43 chiropractors.

[4:45] Alain shares that he became inspired by chiropractic work when he was a teenager working in his father’s chiropractic office.

[8:30] Alain explains how he is 15 years into his practice and has worked in several cities.

[9:11] Alain shares that he took on a partner in his office and stated that they see 140-150 per week and his practice is growing as his partner is just starting to see patients.

[11:00] Alain’s philosophy is that the responsibility for his patients’ health is in their hands. Therefore, he does a lot of education with his patients helping them to stay healthy so that they don’t rely on chiropractic care to maintain their health.

[13:00] Alain explains that he uses a Socratic method with his patients where he asks them several questions in an attempt to help them change their mindset about their health so that they take charge of it.

[15:49] Alain explains that he helps his patients using a variety of gentle chiropractic techniques.

[17:59] Alain shares the history of his business including how he got started. He explained that he thought all he had to do was open his doors and the clients were going to come. 6 months into his practice he was struggling financially. He was scared and depressed and felt ashamed because of his lack of success.

[20:00] Alain stated that one mistake he made in building his practice was due to not having a message that accurately described the value he gives to his patients. He also explained that he expected instant results from the marketing he was doing. The more he didn’t get those results, the more he got down on himself.

[24:00] Alain shares his belief that challenges allow us to become better at what we do, and he feels this was the case with the challenges he experienced building his chiropractic practice.

[25:00] Alain began to dig his way out of the negative situation and mindset that he was in by attending a business-building chiropractic workshop. He started to dissociate his business failures from his self-worth. He then started to implement marketing strategies and repeat them. He stopped expecting that things were going to happen overnight.

[28:00] Alain discusses the strategies he has used to become successful in his business. These include offering community seminars and networking. He describes how he positions himself to be of value to others, instead of asking for referrals. He states that he reaps the rewards of this approach.

[31:24] Alain shares how he approaches organizations to offer health education.

[34:52] Once Alain turned his business around, it took him about 1.5 years of hard work before he became profitable.

38:08 Alain discusses his podcast, Everyday Revolutions and how it came about.

[41:00] Alain shares how he is building his podcast by sharing it with his network and is beginning to build an email list.

[42:07] Alain shares his advice for others building a business – Don’t do what he did. Don’t expect to build your business instantly, and make sure your business is bigger than yourself. Provide value and figure out how to communicate that- and follow-up consistently. Focus on building relationships, not just on attracting new clients. Alain tries to provide an amazing experience every time his patients come for a treatment.

Dr. Alain Desaulniers wants to live in a world where great coffee is enjoyed together, emails are short, hugs are the new handshake and health development is a daily ritual.

As a doctor of chiropractic, international speaker, and educator, he’s been featured on numerous podcasts, has been applauded on stages big and small the whole world over and has been honored to share the platform with some of the brightest minds in health, wellness, and personal development. Alain is also the host of the top-ranked health, success and personal development podcast, Everyday Revolutions.

When he’s not taking care of his wonderful clients at Revolution Health in Vancouver, speaking about optimizing our health and lives, or recording an awesome podcast, you can find him connecting with friends at a local café or adventuring around Vancouver with his inspiration, love, muse and wife, Sarah.

“My practice filled very quickly after Juliet wrote the copy on my website. I recouped my investment – and more– within a few months of having my website up. I know the reason for this is the tight, targeted copy on my site. How do I know this? Because when people write me to let me know they want to work with me, their emails are very personal. They tell me how much my website copy resonated with them and are ready to commit to working with me before we have even spoken! My practice is now… END_OF_DOCUMENT_TOKEN_TO_BE_REPLACED

“I would highly recommend Juliet as a copywriter and a marketing coach to anyone who is starting up in business. Her copywriting skills alone are worth their weight in gold. I wasted more than £600 on two previous websites until Juliet helped me write the copy on my current site. It’s proving to be very successful in attracting clients. I can’t thank Juliet enough for all the help and encouragement she gave me. You may think she is costing you money, but I promise you her help and advice… END_OF_DOCUMENT_TOKEN_TO_BE_REPLACED

“When I was first referred to you for help with marketing I was lost and I didn’t know what to do to build my massage therapy practice. I was afraid to take any steps in fear of taking the wrong ones. You helped me create a great message on my website focusing on my ideal clients and then you helped me market my practice effectively. With your expert knowledge and skills, I became excited and motivated about my massage practice again. Most importantly, I have 3 times as many clients! Thanks … END_OF_DOCUMENT_TOKEN_TO_BE_REPLACED