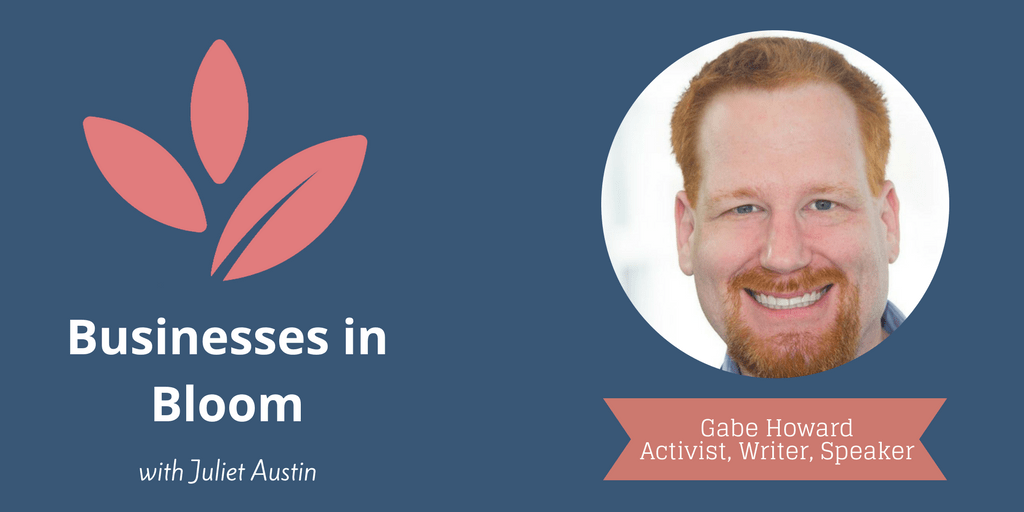 Gabe Howard is a writer, speaker, and mental health activist based out of Columbus, Ohio. In this interview, Gabe speaks about his own mental illness. He talks about his recovery, his career as a writer and speaker, and how he balances his time as both an advocate and a business owner.

[3:10]  Gabe talks about his own mental illness – bipolar disorder and depression. He speaks to his blue-collar upbringing and how his family reacted to his early symptoms. They saw it as a behavior problem and punished him. This didn’t work and eventually pushed him away from his family.

[6:25]  By age 25 Gabe had been married and divorced. He found himself “morally reprehensible” and decided to kill himself. A woman he was dating was knowledgeable about mental illness and recognized it in Gabe. She tricked him into going to the hospital, where he was admitted to the psych ward. The next day he was diagnosed with bipolar disorder. He’s been addressing his illness successfully since then.

[10:09]  Gabe says he doesn’t remember much about being in the hospital. It was a confusing time for him. He didn’t realize he was being committed.

[11:55]  Gabe talks about the 4-year period after his diagnosis. He spent more time managing the bipolar disorder than living. After that period he was in recovery and spent more time living. He had to start his career over. He failed a lot and ended up as the fundraiser for a mental health charity.

[15:30]  Gabe discusses his relationship with his parents now. It’s much better. They have rebuilt their relationship. He says his dad is one of his biggest fans.

[19:15]  Gabe’s current job is mental health advocacy, writing, and speaking for anyone who will pay him. He runs a peer support program for the state of Ohio and does some volunteer work.

[21:10]  Gabe says he mostly speaks publicly about living with bipolar disorder. There are still a lot of stereotypes about mentally ill people. Gabe says telling his story is inspirational, educational, and more engaging than just talking about mental illness in textbook terminology.

[23:39]  Networking is part of getting public speaking gigs. Gabe says the majority of people he asks about event speaking say ‘no’. But, that doesn’t stop him – he keeps asking until someone says, ‘yes’. He has SEO optimization on his website and networks a lot. He travels outside of Ohio for speaking events.

[26:15]  Gabe talks about his writing. He started out writing pro bono until he became in demand. Most of his paid writing work is for larger blogs. He says you have to be smart about what writing you do for free. Use it to catapult yourself.

[29:38]  Gabe also sells some merchandise through his site. He says bipolar emoji shirts can start a conversation about mental illness.

[31:30]  Gabe also has a patreon account on his website. He explains that sending him $3 a month shows dedication. He answers emails first from people who donate to his blog. It’s not a huge source of income, but it helps offset some of his costs as a mental health advocate.

[38:00]  Gabe’s advice to people starting out as public speakers and writers is to keep your expectations low. At first he thought he’d write a few blogs and rise to the top immediately. He now sees that as arrogant. It took four or five years for Gabe to make enough income to live on. Also you have to get the “I’m just trying to help” chip off your shoulder—you’re a small business owner now. If you present yourself as a volunteer, you won’t make money. And get used to the word no, you will hear it a lot at first.

It took four or five years for Gabe to make enough income to live on. Also, you have to get the “I’m just trying to help” chip off your shoulder—you’re a small business owner now. If you present yourself as a volunteer, you won’t make money. And get used to the word ‘no’ as you will hear it a lot at first.

[41:55]  Gabe says his wife has been very supportive. So was another friend, who set him up with paid grant work. These people helped him to not quit. He says it’s important to surround yourself with people who won’t let you stop doing what you love.

Gabe Howard is an award-winning writer, mental health activist, and sought-after speaker and educator. In 2003, he was formally diagnosed with bipolar and anxiety disorders after being committed to a psychiatric hospital. Gabe also runs an online Facebook community, The Positive Depression/Bipolar Happy Place, and invites you to join. More great information can be found on his website, GabeHoward.com.

“When I was first referred to you for help with marketing I was lost and I didn’t know what to do to build my massage therapy practice. I was afraid to take any steps in fear of taking the wrong ones. You helped me create a great message on my website focusing on my ideal clients and then you helped me market my practice effectively. With your expert knowledge and skills, I became excited and motivated about my massage practice again. Most importantly, I have 3 times as many clients! Thanks … END_OF_DOCUMENT_TOKEN_TO_BE_REPLACED

“I would highly recommend Juliet as a copywriter and a marketing coach to anyone who is starting up in business. Her copywriting skills alone are worth their weight in gold. I wasted more than £600 on two previous websites until Juliet helped me write the copy on my current site. It’s proving to be very successful in attracting clients. I can’t thank Juliet enough for all the help and encouragement she gave me. You may think she is costing you money, but I promise you her help and advice… END_OF_DOCUMENT_TOKEN_TO_BE_REPLACED

“My practice filled very quickly after Juliet wrote the copy on my website. I recouped my investment – and more– within a few months of having my website up. I know the reason for this is the tight, targeted copy on my site. How do I know this? Because when people write me to let me know they want to work with me, their emails are very personal. They tell me how much my website copy resonated with them and are ready to commit to working with me before we have even spoken! My practice is now… END_OF_DOCUMENT_TOKEN_TO_BE_REPLACED