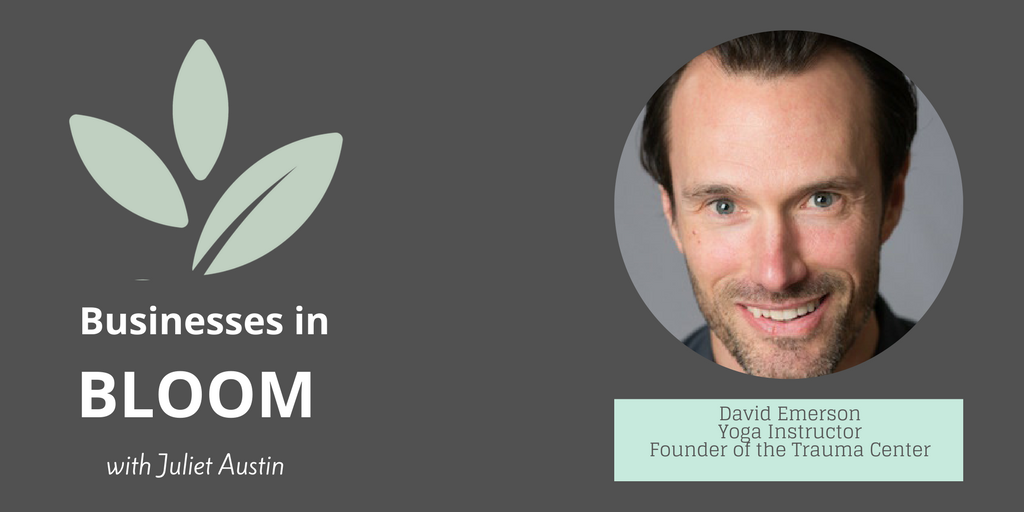 David Emerson is a yoga instructor and former social worker based out of Brookline, Massachusetts. He is the founder and director of Trauma Center at the Justice Resource Institute in Brookline Massachusetts, and teaches yoga to traumatized youth twice a week. In this interview, David talks about his work at the Trauma Center, the science behind yoga and trauma recovery, and the invitational style of trauma-sensitive yoga that he’s helped to create.

[2:45]  David explains how he came to teach yoga. He started out as a social worker for teens and kids.

[4:30]  David says one of his yoga students suggested he contact Bessel van der Kolk, a leading neuroscientist and trauma researcher. David and Bessel started research project in 2003, where David did yoga with traumatized people.

[6:50]  When he started out in social work in the early ’90s, “trauma” was not used to describe at-risk youth—David says many kids he worked with were traumatized and labeled something else. As part of his work he took city teens to the woods for vigorous physical activity. The activity had a clear therapeutic affect.

[8:18]  David says he appreciates the nonjudgmental view of social workers. They don’t look at people through a pathological lens.

[10:02]  David is still doing research with Bessel and his team. The Trauma Center at the Justice Resource Institute took a series of big steps in recent years. In 2009 they received the first National Institute for Health (NIH) grant to study yoga and trauma, in a randomized control trial. They published a paper in 2014 in a psychiatric journal on their findings.

[11:26]  Grad students have done dissertations on the team’s work and interviews with trauma patients have been made available—there’s qualitative work along with the statistical data. Now the trauma center is focused on increasing access for trauma survivors.

[13:00]  David talks about methodology. Any intervention in trauma therapy needs to accommodate the power dynamic between provider and patient. In a yoga class, everything becomes an invitation—“if you like, step one foot forward”—instead of a series of commands.

[16:34]  Classes at the trauma center are open-ended and have been going on for over 10 years. David gets to see the same teens in residential treatment programs for several years. He also works with adults.

[17:36]  David discusses some other differences in their center’s classes. The yoga teacher doesn’t move around the room much, but instead does the poses with the students. A split between provider and consumer sets up a power dynamic, so the yoga teachers at the trauma center participate.

[21:15]  David talks about the finality of trauma, which can destroy a person’s sense of agency. Yoga teachers at the trauma center give clear choices for poses to facilitate the process of choosing.

[22:40]  David talks about the neuroscience behind trauma. People with complex trauma have disregulation in the parts of the brain that move information from body to awareness. They’re getting flooded with generalized sensory information or they’re not getting any information at all. So trauma sensitive yoga teachers work to facilitate clear sensory body experience—“If you’re bending your legs, you may feel some feeling in the top of your legs”—to help people rebuild damaged pathways.

[24:48]  The trauma center’s research has been supported with MRI scans, taken before and after twenty weeks of yoga. Key enteroceptive regions were showing more activity afterward.

[25:49]  The trauma center has classes for adults, teen outreach, and classes for young kids. They also do outreach with rape crisis centers, domestic violence shelters, military bases, and veterans groups.

[26:52]  Trauma center funding is challenging. The center has built up a scholarship for classes so no one is turned away. When David works with kids, the classes are subsidized by clinical funds.

[28:17]  The Trauma Center at the Justice Resource Institute offers a certification program for yoga instructors and clinicians. Sometimes the two groups are separated, at other times they are in class together.

[30:06]  David talks about his typical day. He runs the certification program (which is now international); he’s a liaison with the trauma center and their parent center; he does a fair amount of writing; and he teaches yoga in a residential program with kids two mornings a week. Also, he’s planning for the center’s future.

[32:48]  At this point the center has certified 60 instructors around the world. The center is starting to work with clinical teams who want to implement programs in their institutions.

[34:11]  David talks more about the certification program. There are trauma-sensitive yoga trainers in Australia, Germany, Canada, and in the US.

[36:10]  David says the regimented, outcome-oriented structure of residential homes, veterans’ groups, and other state funded programs have been a challenge to their model of trauma recovery. This is another reason why the invitational approach to yoga is so important.

[37:45]  David explains how he makes an income; it’s a combination of a half-salary from JRI, book sales, and the certification program funds.

[40:00]  David offers advice for others looking to start a big project: be passionate about it, otherwise the many ways it can go wrong will seem overwhelming. Try to find established people in your field that can help you along.

Dave is the Founder and Director of Yoga Services for the Trauma Center at the Justice Resource Institute in Brookline Massachusetts, where he coined the term “trauma-sensitive yoga”.

He was responsible for curriculum development, supervision and oversight of the yoga intervention component of the first of its kind, NIH funded study. The study was conducted by Dr. Bessel van der Kolk. The study focused on assessing the utility and feasibility of yoga for adults with treatment-resistant PTSD.

In addition to co-authoring several articles on the subject of yoga and trauma, Mr. Emerson is the co-author of Overcoming Trauma through Yoga, released in 2011 by North Atlantic Books and Author of the forthcoming, Trauma-Sensitive Yoga in Therapy (Norton, 2015). He leads trainings for yoga teachers and mental health clinicians in North America, Europe, and Asia.

“My practice filled very quickly after Juliet wrote the copy on my website. I recouped my investment – and more– within a few months of having my website up. I know the reason for this is the tight, targeted copy on my site. How do I know this? Because when people write me to let me know they want to work with me, their emails are very personal. They tell me how much my website copy resonated with them and are ready to commit to working with me before we have even spoken! My practice is now… END_OF_DOCUMENT_TOKEN_TO_BE_REPLACED

“I would highly recommend Juliet as a copywriter and a marketing coach to anyone who is starting up in business. Her copywriting skills alone are worth their weight in gold. I wasted more than £600 on two previous websites until Juliet helped me write the copy on my current site. It’s proving to be very successful in attracting clients. I can’t thank Juliet enough for all the help and encouragement she gave me. You may think she is costing you money, but I promise you her help and advice… END_OF_DOCUMENT_TOKEN_TO_BE_REPLACED

“When I was first referred to you for help with marketing I was lost and I didn’t know what to do to build my massage therapy practice. I was afraid to take any steps in fear of taking the wrong ones. You helped me create a great message on my website focusing on my ideal clients and then you helped me market my practice effectively. With your expert knowledge and skills, I became excited and motivated about my massage practice again. Most importantly, I have 3 times as many clients! Thanks … END_OF_DOCUMENT_TOKEN_TO_BE_REPLACED