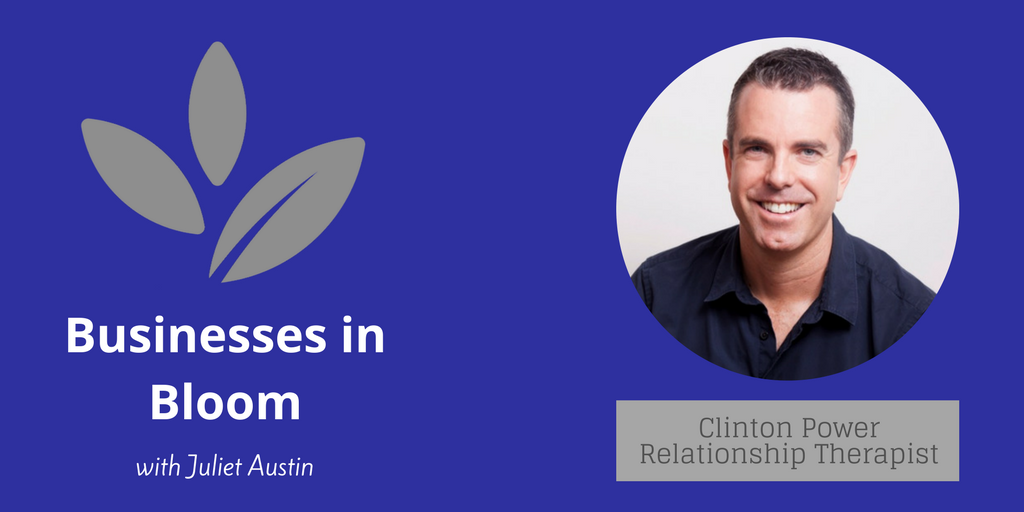 Clinton Power is a relationship therapist based in Sydney, Australia. He currently runs a private practice with 2 associates focused on relationship therapy. He is also the founder of the online directory Australia Counselling. Clinton also co-runs the Mind Body Training Institute with Juliet Austin as well as The Ask Juliet and Clinton Show, a marketing podcast for therapists and wellness businesses. In this interview, Clinton discusses his life before becoming a therapist and how he has grown and maintained a successful private practice as well as run his other projects.

[4:05]  Clinton talks about how he became a therapist. He used to be a professional musician who played the trumpet and holds two degrees in classical music. He grew up in Perth, Australia but moved to Sydney to attend a conservatory. He started freelancing as a musician with symphony orchestras and taught music on the side. Clinton said he had some performance anxiety and did hypnotherapy to treat it. He credits hypnotherapy with helping him win an audition to become a contracted musician with the Australian Symphony Orchestra.

[8:40]  Clinton started psychotherapy training after this initial interest in hypnotherapy. He went with a friend to an open day at a counselling course, which was the beginning of his studies. One of the leaders of the course took Clinton under her wing and to train him in relationship therapy.

[10:22]  Clinton’s first counselling job was in a drug and alcohol rehab clinic. He learned quickly it wasn’t for him, and soon got a job at an organization called Relationships Australia. He worked 15 hours a week with couples at this clinic. Clinton says he talked the institute into hiring him, and it was a baptism by fire as he didn’t feel confident in what he was doing.

[12:16]  Clinton wasn’t convinced he wanted to do couples’ therapy at first because it is so challenging.

[12:53]  In 2011 Clinton started the directory Australia Counselling, which was a huge project. He saw the project as an additional revenue stream and ended up working 6-7 days a week for 3 years to get the directory off the ground. Clinton sold the directory in January 2016, which has freed him to focus on the Mind Body Training Institute, his podcast with Juliet, and his private practice.

[16:10]  Clinton explains that if he ever takes on a project as big as Australia Counselling again, he’ll spend more time on the planning stage. The investment and maintenance of the directory was very large and he ended up making a small financial profit. However, the business, marketing, and management experience was very valuable.

[19:07]  Clinton currently works 17-20 clinical hours a week. 50-60% of his clients are couples. He works Monday-Thursday and spends Fridays on marketing and admin. He also sees 3 clients on Saturday mornings, which is his most in-demand day.

[21:20]  Clinton talks about taking on 2 associates in his practice. He’s had associates for 4 years, and says setting things up right at the beginning is crucial. He has an 8-page contract now that spells out each party’s responsibilities and agreements.

[23:25]  Clinton says it’s important to have an overflowing practice before taking on associates, and to make sure the associates are a good fit.

[24:40]  Clinton says a lot of time is invested in training associates at first. He has a great virtual reception team that also helps train new associates.

[26:00]  Clinton always speaks with clients over the phone before seeing them in his office, even if it’s a quick chat about where the office is. He says the relationship starts over the phone. It’s also a brief screening process and a way to learn how the client found Clinton’s practice.

[27:25]  In 2013, after he’d been blogging for a while, Clinton decided to write an eBook. He realized he had half a book already written within his blog archives. He got up early and wrote 1500 words every day for 10 days to come up with the rest of the content. He worked with an editor to clean up the draft. It took 3 weeks from the start to get the eBook up on Amazon.

[33:35]  Clinton says he set a $3 price point for his eBook to make it competitive with the thousands of other relationship products in the Kindle store. Also, he wanted Amazon to do the marketing work. The book still pays him a small passive income.

[34:00]  Clinton is enjoying his private practice now more than ever. He went through a few years of struggling with his work because some of the couples he saw were really challenging. In the last few years he’s sought out specific couples therapy trainings and these have made a big difference in his practice. Dr. Stan Tatkin’s and Dr. Ellyn Bader’s trainings have both helped Clinton enjoy his work more.

[36:05]  Clinton talked about how he struggled to build a practice before he started consulting with Juliet Austin in 2008 – This was a turning point for his private practice. Finding a niche and creating a solid website were the first things Clinton did to build his practice that paid off. Clinton also found he loved blogging which has helped him build his practice over the years. He also uses Google AdWords and website marketing to promote his practice. Clinton also guest blogs at other websites.

[40:25]  Clinton’s advice to people starting a new business is to persevere. He says running a private practice is very challenging, especially for people with little to no business experience. Train constantly and invest in your business. Clinton says marketing works but don’t expect instant results.

Clinton is a relationship therapist with over 14 years of experience working with individuals and couples. He is the founder of Clinton Power + Associates, a private practice dedicated to helping singles and couples move out of relationship pain.

Clinton’s book 31 Days to Build a Better Relationship has been downloaded over 4,000 times and is available for Kindle on Amazon.

Clinton is the former founder of Australia Counselling, which is a free directory for finding counselors and psychologists in Australia.

Clinton is regularly featured in the media on the topic of relationships and has been interviewed by MSN.com, The Sun-Herald, Men’s Health Magazine, Cosmopolitan, ABC Radio National, SBS Radio and 2UE Radio. Follow Clinton on Twitter or Facebook.

“My practice filled very quickly after Juliet wrote the copy on my website. I recouped my investment – and more– within a few months of having my website up. I know the reason for this is the tight, targeted copy on my site. How do I know this? Because when people write me to let me know they want to work with me, their emails are very personal. They tell me how much my website copy resonated with them and are ready to commit to working with me before we have even spoken! My practice is now… END_OF_DOCUMENT_TOKEN_TO_BE_REPLACED

“When I was first referred to you for help with marketing I was lost and I didn’t know what to do to build my massage therapy practice. I was afraid to take any steps in fear of taking the wrong ones. You helped me create a great message on my website focusing on my ideal clients and then you helped me market my practice effectively. With your expert knowledge and skills, I became excited and motivated about my massage practice again. Most importantly, I have 3 times as many clients! Thanks … END_OF_DOCUMENT_TOKEN_TO_BE_REPLACED

“I would highly recommend Juliet as a copywriter and a marketing coach to anyone who is starting up in business. Her copywriting skills alone are worth their weight in gold. I wasted more than £600 on two previous websites until Juliet helped me write the copy on my current site. It’s proving to be very successful in attracting clients. I can’t thank Juliet enough for all the help and encouragement she gave me. You may think she is costing you money, but I promise you her help and advice… END_OF_DOCUMENT_TOKEN_TO_BE_REPLACED