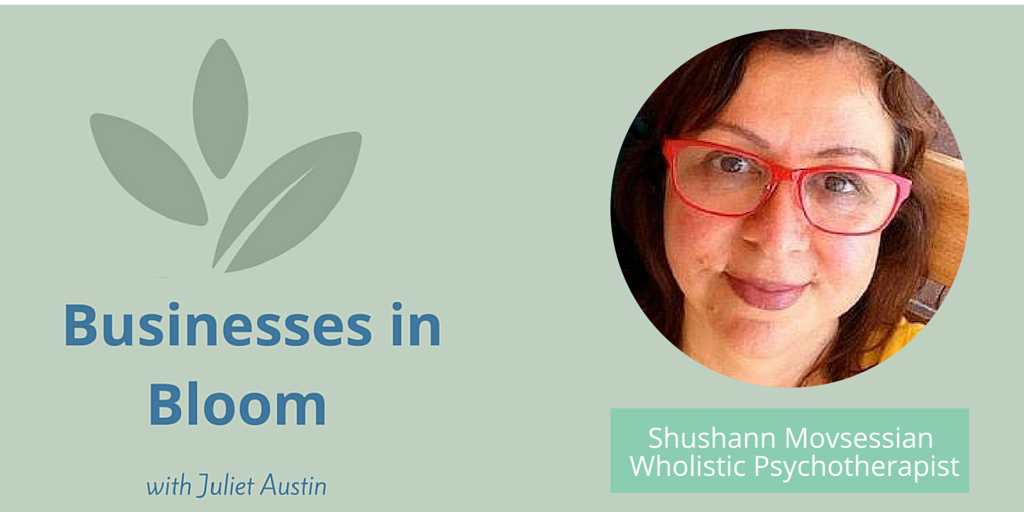 Shushann Movsessian’s story illustrates the highs and lows of being in business. In spite of achieving early success in her private practice, she describes a low point where she focused a lot on developing retreats for women and neglected her therapy practice. As a result, she lost a lot of clients and had to be very vulnerable as she got help to build things back up again. She learned the hard way to put consistent effort into her practice to keep it going.

On the flip side, Shushann has had tremendous success with her Facebook page. She has over 1.5 million followers and explains how she achieved this.

NOTE: The minute markers below are for the audio.

[4:55] – Shushann stated her inspiration for becoming a therapist stemmed from her personal and family of origin issues that she began to work on in her early 20’s. She was able to alleviate much of the anxiety she had.

[5:00] Shushann talks about how she built her practice slowly as she worked at a part time job.

[7:51] – Shushann describes how she gets traffic to her website from search

[10:00] – Shusann says that she writes articles as a way to get traffic to her

therapy website. She specifically mentioned an article she wrote on betrayal in relationships – she received a lot of traffic from the article due to the popularity of the topic.

[10:51]- Shushann talks about writing articles on current issues and topics that are of interest to your audience.

[11:30]- Shushann discusses some retreats she held in Bali for women and how she marketed them.

[12:00] Shusann has built her therapy practice by attending networking meetings, attending supervision groups with other therapists, and her website. She

mentioned how important it is to build relationships with others as part of being in business.

[12:45] – Shushann sees 12-14 clients per week- primarily women and couples who come to see her largely for relationship problems. She prefers to keep her practice at this size.

[13:24] – In addition to income from her private practice, Shushann generates income from offering women’s retreats and sells audios on her website.

[17:00] – Shushann’s website has been a starting point for her marketing. She has had her website up since about the year 2000. Juliet explains the reasons she likely ranks well in SEO in addition to the articles she writes, is because she had a site up so many years ago.

[18:48] – Shushann describes a time in her business when she nearly “went

under” in her business. This happened because she was working on developing her Facebook page and neglected her therapy practice. It is a difficult time for her. She ended up getting a part-time job to bring in some steady income. She describes that decision as being a life-saver.

[20:32] – Shusahnn talked about how vulnerable she had to be when she was having a difficult time in her practice. She stated that as a therapist, she didn’t want to appear that she was not doing well. She mentioned fears of appearing like she was a bad therapist because she wasn’t doing well.

[21:43] – Through her difficulties, Shushann has learned to put consistent attention on building her practice. She also maintains her part-time job, which gives her the ability to build her practice stress-free because she has secure income.

[23:00] – Shushann talked about the success of the audios she sells on her site. She seemed surprised at how well they are selling. She stated that is a risk to offer something that is non-mainstream such as her focus in soul work and mysticism because Australia is very conservative.

followers. She ran FB ads, asks fans to like and share and Like her posts. She described that she was hovering around 100,000 fans and then all of sudden it took off like a steam train and went viral. In the past 2 years, they have gone from 100,000 fans to 1.5 million.

[31:02] Shusann’s advice for other therapists: She said you have to hang in there and be persistence and consistent. She stated the importance of believing in what you have to offer. She stated it has been beneficial to have a colleague to work with on her Facebook page and for the women’s retreats. She finds this helps with her motivation in being consistent with marketing.

[32:00] Shushann stressed the importance of business owners keeping up to date with marketing information. She stated that it’s been hard to build her business and takes time and does not come naturally to her.

Shushann is an experienced and mature counsellor specialising in women’s spiritual psychology in Sydney, Australia. She is passionate about supporting the significant transitions people take in their lives and ultimately connecting to their inner wisdom and guidance. Her vision is to support and empower her clients to connect to their inner guidance and be conscious co-creators in their relationship to their lives.

Shushann has featured in Living Now Magazine, Preventative Health Magazine, Copperstrings, The Sydney Morning Herald’s Essentials and Body and Soul Magazine, and on Radio 2GB, for her work and expertise. You can find out more about Shushann here.

“My practice filled very quickly after Juliet wrote the copy on my website. I recouped my investment – and more– within a few months of having my website up. I know the reason for this is the tight, targeted copy on my site. How do I know this? Because when people write me to let me know they want to work with me, their emails are very personal. They tell me how much my website copy resonated with them and are ready to commit to working with me before we have even spoken! My practice is now… END_OF_DOCUMENT_TOKEN_TO_BE_REPLACED

“I would highly recommend Juliet as a copywriter and a marketing coach to anyone who is starting up in business. Her copywriting skills alone are worth their weight in gold. I wasted more than £600 on two previous websites until Juliet helped me write the copy on my current site. It’s proving to be very successful in attracting clients. I can’t thank Juliet enough for all the help and encouragement she gave me. You may think she is costing you money, but I promise you her help and advice… END_OF_DOCUMENT_TOKEN_TO_BE_REPLACED

“When I was first referred to you for help with marketing I was lost and I didn’t know what to do to build my massage therapy practice. I was afraid to take any steps in fear of taking the wrong ones. You helped me create a great message on my website focusing on my ideal clients and then you helped me market my practice effectively. With your expert knowledge and skills, I became excited and motivated about my massage practice again. Most importantly, I have 3 times as many clients! Thanks … END_OF_DOCUMENT_TOKEN_TO_BE_REPLACED