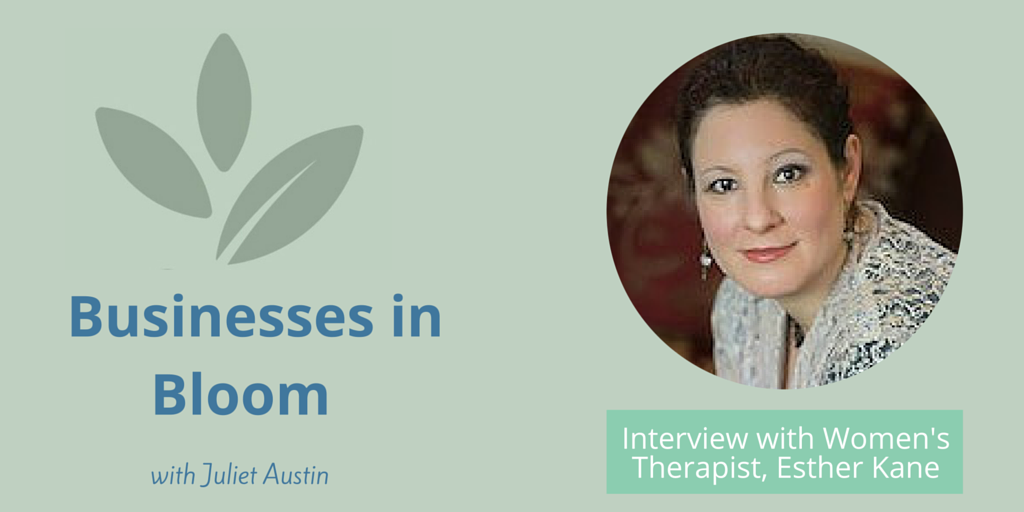 Women’s Therapist, Esther Kane decided she wanted to be a therapist after seeing psychologists herself as a child. She describes her childhood as being traumatic and shares that she developed an eating disorder in her early years.

Esther is a passionate writer and discusses how she has acquired writing gigs for other blogs and magazines. She has written several books as a way to increase her exposure and add a revenue stream to her practice. Esther describes herself as a maverick and talks about how she believes this has helped her attract clients.

NOTE: The minute markers below are for the audio.

[4:30] Esther describes her own history with trauma and her reasons for being a therapist.

[7:38] Esther describes her 15 years in private practice as a therapist and how Juliet and her husband, a web designer, have helped with the success of her business.

[9:54] Esther describes her experiences with ‘burnout’ and the importance of self-care.

[11:42] Esther describes the 3 books she has published and a 4th one she is currently working on.

[16:13] Esther writes blogs for MyFitnessPal.com which focus on the links between emotions and over-eating and says these have increased her book sales. Her writing had led to being contacted for interviews by various women’s magazines and freelancers. She highlights the difficulties of writing weekly posts for her own blog but also how this connectedness has been beneficial with clients, new and old.

[22:09] Esther mentions that she offers Skype, phone and FaceTime counselling and talks about how, as a result of her blogs’ reach, she has seen the number of clients across Canada increase to almost a third of her practice.

[23:10] Esther highlights her appearances on television and radio, including a bi-monthly slot as a resident psychotherapist on ‘Life Style with Patty Mack’ on C-FAX 1070 Victoria.

[27:01] Esther talks about how she started out marketing in a small community doing workshops for local people in recreational centers and teaming up with other healthcare professionals.

[29:08] Esther describes how she distributed newsletters for women’s health and wellness in Vancouver, and also when she started up in Courtenay, and how this boosted her business.

[31:46] Esther recalls experiences where she has had difficulty in her career and stresses that they have been opportunities for personal growth. This included some challenging public speaking experiences.

[34:30] Esther says that being a maverick can help you find success in private practice.

[37:30] Esther tells of her  family’s traumatic experiences during the Holocaust. She describes her guilt and how being a client in therapy helped revive her self-worth.

[39:28] Esther advises other health professionals looking to build their business to be patient, to have faith in themselves and their work, and to keep a focus on why you are doing it.

With over 15 years of experience as a therapist, her main focus is helping women to become free of barriers which keep them stuck so that they can become all that they dream of being. To learn more about Esther’s therapy services and her books please visit her website: http://www.estherkane.com

Like this episode? It would be greatly appreciated if you’d leave a review on iTunes.

“When I was first referred to you for help with marketing I was lost and I didn’t know what to do to build my massage therapy practice. I was afraid to take any steps in fear of taking the wrong ones. You helped me create a great message on my website focusing on my ideal clients and then you helped me market my practice effectively. With your expert knowledge and skills, I became excited and motivated about my massage practice again. Most importantly, I have 3 times as many clients! Thanks … END_OF_DOCUMENT_TOKEN_TO_BE_REPLACED

“I would highly recommend Juliet as a copywriter and a marketing coach to anyone who is starting up in business. Her copywriting skills alone are worth their weight in gold. I wasted more than £600 on two previous websites until Juliet helped me write the copy on my current site. It’s proving to be very successful in attracting clients. I can’t thank Juliet enough for all the help and encouragement she gave me. You may think she is costing you money, but I promise you her help and advice… END_OF_DOCUMENT_TOKEN_TO_BE_REPLACED

“My practice filled very quickly after Juliet wrote the copy on my website. I recouped my investment – and more– within a few months of having my website up. I know the reason for this is the tight, targeted copy on my site. How do I know this? Because when people write me to let me know they want to work with me, their emails are very personal. They tell me how much my website copy resonated with them and are ready to commit to working with me before we have even spoken! My practice is now… END_OF_DOCUMENT_TOKEN_TO_BE_REPLACED