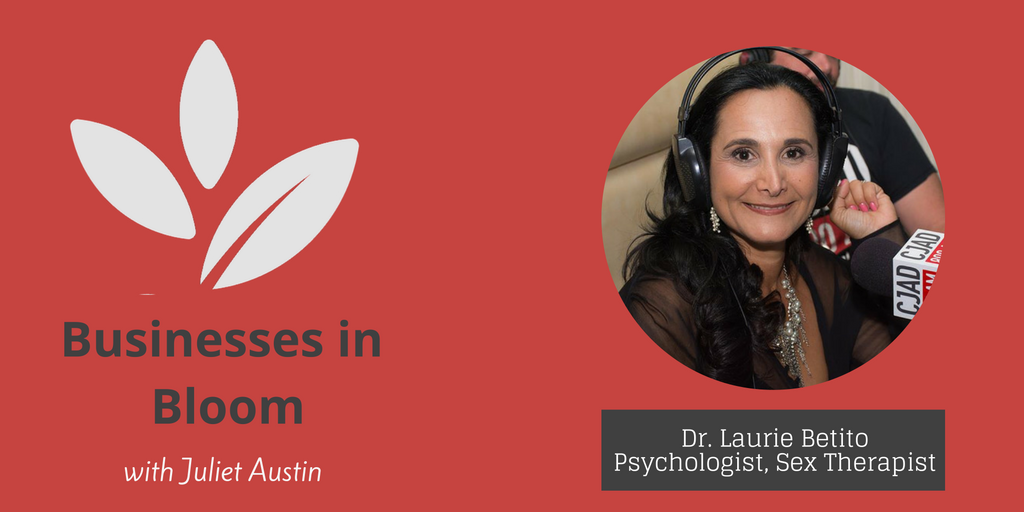 Dr. Laurie Betito is a clinical psychologist who specializes in sex therapy. Besides her busy private practice in Montreal, Quebec, Laurie hosts a nightly radio show, Passion, on CJAD 800. With over 27 years in radio and several books published, she’s the most well known sex therapist in Montreal. In this interview Laurie talks about starting out as a therapist, the kinds of clients she sees, and how both have changed since she started.

[2:08]  Laurie Betito talks about how she became a sex therapist. She began in psychology and social wok, where she got her doctorate. She did a two-year intensive sex therapy training in between degrees. Then she went into media, to reach the general public.

[3:50]  Laurie explains why she chose sex therapy. She was the person in high school everyone went to for relationship information (she got hers from Cosmopolitan magazine). Sex therapy was a natural fit for her.

[5:32]  As the oldest of four kids, Laurie babysat a lot, and she took care of her grandmother. She knew she’d end up in the helping profession.

[6:06]  Laurie talks about her practice. She has two offices in Montreal, and specializes in marriage counseling. Every evening from 10-11pm Eastern time she hosts a radio show on sexuality, now in its 17th year. She’s been in radio for 27 years.

[8:22]  Laurie explains more about her show. She puts together returning monthly panels of guests and experts. She invites gynecologists, teachers, a urologist—a wide range of professionals. Listeners call in and text in questions.

[13:30]  Laurie speaks about her private practice. She sees a maximum of 25 patients a week.

[13:54]  Laurie discusses her book, The Sex Bible for People Over 50, which came out two years ago. She was on a short deadline, and she’s proud of it. It’s a how-to book with pictures.

[17:20]  Laurie speaks on how she works with couples after infidelity.

[18:39]  Laurie talks about the changes in sexual issues she’s worked with over the course of her career.

[21:34]  Laurie sees more clients with more extreme fetishes now, the ones that cause marital distress, as opposed to people with foot fetishes, which are well supported on the Internet.

[22:55]  Laurie talks about polyamory, which has been around secretly for a long time. Now three-way couples are out in public. When she started, gay marriage was not legal.

[25:44]  Laurie speaks to curiosity that keeps people listening to her show.

[26:12]  Laurie talks about her start in private practice. She rented an hourly space. Eventually, she was able to rent an office with another professional.

[29:00]  After 27 years on the air in Montreal, Laurie’s the go-to sex therapist in Montreal. She doesn’t have to advertise, but she does remind listeners to call for a consultation.

[31:24]  Laurie has a lot of patient turnover, which is part of being a sex therapist.

[31:45]  Laurie talks about the many support groups she has run over the years. Now she’s running workshops for mental health professionals sex therapy.

[33:12]  Laurie discusses giving talks at nonprofits and other organizations. She does a lot of speaking. When she’s not working at her practice or radio show, she writes and blogs. She does legal expertise work too.

[35:05]  Laurie talks a little about her non-work activities.

[35:43]  Laurie offers advice for new therapists: specialize. If you can find one area that fascinates you and you can specialize in, get known in that area. Make your name come up first.

Dr. Laurie Betito is a clinical psychologist in Montreal, Canada with a specialty in sex therapy, and has been a practicing psychotherapist for the last 27 years. For the last 24 years she has been doing radio and television, dispensing sex and relationship advice.  She is a regular contributor to various magazines, newspapers and television shows. She is presently heard nightly in Montreal on CJAD 800—her show Passion has been on the air for over 16 years and has always been number one in its time slot.
Dr. Laurie is also President of the Sexual Health Network of Quebec  (formerly Planned Parenthood), and past president of the Canadian Sex Research Forum. You can find out more about Laurie at her website: http://drlaurie.com

Dr. Laurie is the author of The Sex Bible for People Over 50

“I would highly recommend Juliet as a copywriter and a marketing coach to anyone who is starting up in business. Her copywriting skills alone are worth their weight in gold. I wasted more than £600 on two previous websites until Juliet helped me write the copy on my current site. It’s proving to be very successful in attracting clients. I can’t thank Juliet enough for all the help and encouragement she gave me. You may think she is costing you money, but I promise you her help and advice… END_OF_DOCUMENT_TOKEN_TO_BE_REPLACED

“When I was first referred to you for help with marketing I was lost and I didn’t know what to do to build my massage therapy practice. I was afraid to take any steps in fear of taking the wrong ones. You helped me create a great message on my website focusing on my ideal clients and then you helped me market my practice effectively. With your expert knowledge and skills, I became excited and motivated about my massage practice again. Most importantly, I have 3 times as many clients! Thanks … END_OF_DOCUMENT_TOKEN_TO_BE_REPLACED

“My practice filled very quickly after Juliet wrote the copy on my website. I recouped my investment – and more– within a few months of having my website up. I know the reason for this is the tight, targeted copy on my site. How do I know this? Because when people write me to let me know they want to work with me, their emails are very personal. They tell me how much my website copy resonated with them and are ready to commit to working with me before we have even spoken! My practice is now… END_OF_DOCUMENT_TOKEN_TO_BE_REPLACED